PhD part 12: Thought for the day: can you be a practitioner and a critic of design?

Any social science should approach the things it studies critically and skeptically, that is, with an open mind. Otherwise our research would just end up reaffirming the status quo

On thinking critically to avoid the status quo

In my experience, design is not a very reflexive practice, generally speaking. We’ve drunk the rhetoric KoolAid of ‘solving wicked problems*’ to the point it’s easy to forget that we exist as a discipline because we polish the outputs (sometimes the turds) of a capitalist system (or as Arturo Escobar more eloquently puts it, we tend to forget ‘the functionalist, rationalistic, and industrial traditions from which it [design] emerged’ (Escobar, 2018, p.xi).

At design school there are of course some topics that focus on social good or foreground critical thinking, but maybe not enough turning the lens of critique on the reason design exists in the first place? This conflicts me. I have mixed feelings about ‘biting the hand that feeds’ from the comfy safety of academia, which has let me sidestep some thorny commercial and ethical choices I’d have to make as a designer in ‘the real world’. But that’s another story….

This week, Anne Galloway, an awesome anthropologist in the design school at Victoria here in Wellington shared a tweet by Lee Vinsel (which I enjoy largely for the term ‘larded up’). It, the article it linked to and the twitter discussion that follows articulates similar feelings to mine above (and also points to the fact that there’s a gendered dimension to how these opinions get dealt with in the public arena):

The Medium post Vinsel’s tweet links to is about design and capital and asks, amongst other things, why ROI is the default Design Council response to questions about why people should hire designers (in Aotearoa, the Value of Design report did the same thing. Thanks, PwC! :-/). I mean, sure, there’s truth in there, but it leaves me feeling a bit icky. It’s like ‘ecosystem services’ – quantifying financially the benefits we get from nature and assigning them an economic price tag. You can do it, it makes a point, but it sort of sullies it a bit; reduces something awesome to something transactional.

Another thing I read this week was an interview with STS luminary Sheila Jasanoff. She says STS scholars should approach the thing they study – science and technology – critically or risk ending up ‘reaffirming the status quo’ I think we need a bit more of that within design, but I’m at a loss where to start. I’ve talked before about what I think design is, and touched on this conflict before, but I’m not making much headway and I feel a bit mired.

How does one go about being a practitioner and a critic without tying oneself in endless knots? Anne Galloway is situated in a design school, but she's observing from a different academic tradition, which I assume gives a certain clarity of distance… I know several great designers now in academia who quietly tell me they don’t call themselves that any more (and some more who I don’t think really are but still use the moniker…). Some veered too far towards design-as-business practice and then threw up their hands in despair. Some really do believe the hype, but can no longer produce anything physical and tangible because they’ve been off the tools too long. Some got sucked into pen-pushing. Some don’t feel craft is adequately valued any more.

How do I walk the tightrope, with disillusionment on one side, the commercial ‘design thinking’ avenue on the other? I feel like I’m constantly going around a design is useful / but design is a capitalist stooge and can’t fix everything it says it can / but nicely designed things are nice / things that are nice work better / doing things better is good / design is useful track. Can I be a critic of design from the inside? 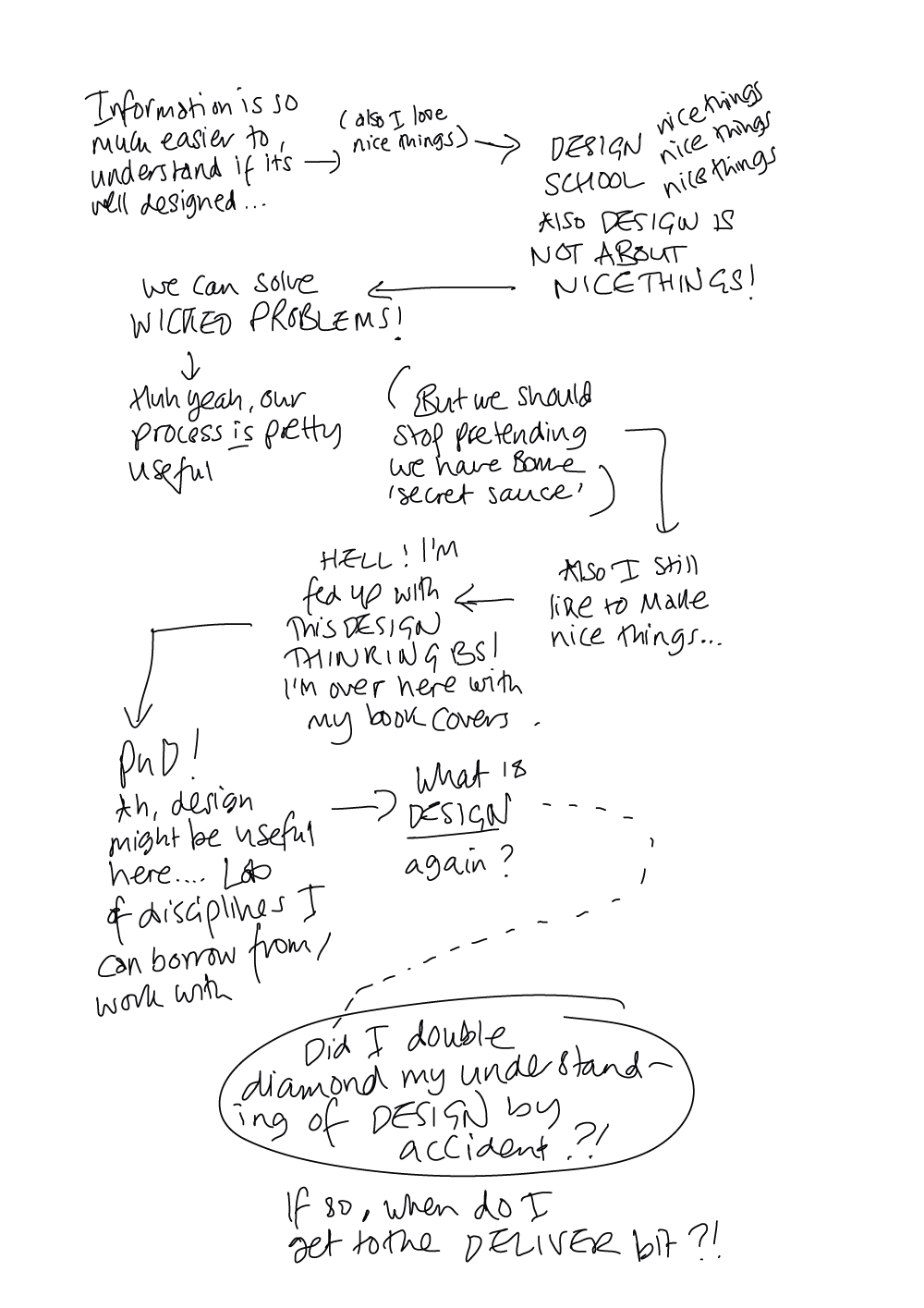 My thought process on how I feel about design

Another thing I’ve been bogged down with is (forgive the hideous oversimplification) how anthropology’s way of doing is to observe, document, decode and articulate a situation or process. Design does that (perhaps sometimes an anthropology-lite version), but then seeks to propose, intervene and iterate… I guess I’m still not ‘owning’ my process and I’m feeling a bit inferior. Which, I reluctantly concede, makes this little meander feel incredibly self-indulgent. Yep, I’m procrastinating via minor existential crisis again. Get. The. Fuck. On. With. It. Bailey!

*Wicked problems. I’d never thought much about this term until at a recent Te Pūnaha Matatini hui one of the investigators said they didn’t use it as it’s offensive in some of the communities they work in and with. Huh. OK. That’s a curveball. Is this another version of the brief ‘political correctness gone mad’ flashpoint ‘can’t say brainstorming’ in case it upsets … someone (allegedly people with epilepsy, but this has since been carefully deconstructed by the Epilepsy Society), or is there something in it?

Maybe because design has gotten larded up by values/service/justice talk when it has always been about smoothing the edges of capitalism?

Interesting/wild post on design as a tool of capital. https://t.co/69JZhETYlf

Design is one of the disciplines/professions that copes poorly with critique / hasn’t mastered reflexivity. I’ve been savaged for saying something like your first tweet but you get away with it.