I’ve been PhDing for just over a month. I have more books out from the libraries of Massey, Vic and elsewhere than is reasonable for a single human.

I was feeling a bit smug in a ‘look at me being busy’ way about the piles on my desk(s) but the unopened ones have begun to make me feel guilty. Looming ominously, they may be multiplying on their own… I really need to learn to speed read.

My googled words list continues to grow, as documented on Twitter. In one of my outpourings I self-deprecatingly said I was PhDing ‘poorly’. A good friend gave me a slap on the wrist for that. I said I was doing ‘public disclosure of self-doubt’ (as an aside, perhaps I should abbreviate this to PDSD and start peppering it through my writing? Acronyms are still confusing me so maybe I should trial my own). The response to my PDSD pat from my friend: “if you want to go open book, do it totally. Go for more than hanging hashtags around your neck that are at best a little dismissive of the whole task”. A little harsh I thought (I stewed, called them judgy and had a sulk), but it was a timely reminder that I should use this format to disclose more than 280 character snippets of winge. So, here’s me giving exactly that a go…

I’ll admit to not really knowing anything about ‘open book’ research. I guessed, in science, it’s probably about publishing the experiments that don’t work as well as the ones that do? A bit of googling led me to ‘open science’ and ‘open writing’: ‘a writing practice that includes both process and product’ (Meier & Wegener, 2016). A little more googling got me to a review of a book also by Meier & Wegener (2017): The Open Book: Stories of Academic Life and Writing or Where We Know Things. Despite being described as ‘a radical genre blend … an experimental co-memoir exploring the role of writing in academia’ and being in a series called Imagination and praxis (praxis being a word with which I have history (see my first #JoDoesPhD post), and ‘radical genre blend’ making me shudder slightly and feel rather intimidated) I did like that the review (Longden, 2017) highlighted the importance of interdisciplinary collaboration and the book’s questioning of how we ‘…remove the ‘filter’ of academic writing and expose the thought process behind ‘all these references and neat sentences’. That felt like the ‘public disclosure’ I was going for; an acknowledgement of the messiness of how we find stuff out and translate it for our own practice. There’s an ebook version in the library. I read the introduction and I’m intrigued, and again slightly intimidated. They (‘Ninna and Charlotte’ as they sign off, almost a single entity as they weave and blend voices) ask: ‘How do we walk the line between detached, impersonal writing and selfconscious, declaiming writing?’ (Meier & Wegener, 2017, p.xi) and (after googling ‘declaiming’!) realise I wonder the same thing… I’m off down a braided path of reference surfing with this area, and I’ll no doubt return to it when my thoughts are more coherent.

Writing the 'myth' of the science process

In another parallel train of thought, inspired by some conversations at the SCANZ conference I was led to a 1963 talk by Peter Medawar: ‘Is the scientific paper a fraud?’ (or rather a 2014 paper revisiting it by Howitt & Wilson – hat tip Mike Dickison). Howitt & Wilson describe Medwar’s concern as the way ‘the highly formalized structure [of a scientific paper] gives only a sanitized version of how scientists come to a conclusion and that it leaves no room for authors to discuss the thought processes that led to the experiments’. They go on to highlight how this creates a faulty impression of how science really takes place, perpetuating ‘a stereotype of scientists as logical and rational beings, doggedly adhering to the scientific method’ (Howitt & Wilson, 2014, p.481), with no recognition of serendipity, mistakes, or the odd curveball result. This, they suggest, can lead to students receiving a sanitised view of what science is, and posit that giving a more rounded picture prepares them for being future scientists, but also helps produce ‘scientifically literate citizens’ (p.484). I wonder, could ‘open writing’ help scientists reflect and articulate their process transparently, and help other people understand the inherent twists, turns and tensions on the way to consensus?

Another tangent thought came from a recent workshop I attended at Massey: Kia eke ki te taumata: Success for Māori in Tertiary Education. Tama Kirikiri who led the workshop touched on the way that when visitors come to the marae, there is always a conversation (either a formal mihimihi or general chat) around where someone is from; their whakapapa, and that the point is, to find common ground and shared connections. This put me in mind of the way Dan Hikoroa and others at the Te Pūnaha Matatini Hui offered something of a mihimihi, or a version of it at the start of their talks. In my MDes thesis I wrote about Hillary Collins (2010, p.37) advocating for writing a values statement to heighten the awareness of both practitioner and reader. I was interested in the way disclosure can be a tool for ethical design practice. As Lucienne Roberts (2006) says in the introduction to her book: ‘Everyone has baggage that informs their thinking. So, just as politicians have to declare an interest, I thought it would be useful to include something of my history’. I’ve tried to do this since, and see open writing as a way to extend this, to be more transparent, and perhaps build more trust, especially in the polarised post-truth world.

Some more PDSD and another tangent: with the few things about ‘open writing’ that I’ve read, I realise I am a little uncomfortable with writing from the social sciences. It has an unfamiliar vocabulary. I find it intimidatingly theoretical. I think for me the mixing of disciplines is necessary; desirable even. It just brings to the fore the sense of not belonging to that tribe. Design (the disciplinary mode I most identify with) is not the same as science, or the humanities. Back in the 1980s Nigel Cross and others were defining this ‘third culture’, central to which are different problem solving methods; documenting design as more than 'the artefact' and validating a 'designerly way of knowing' that is distinct, but no less valid:

The phenomenon of study in each culture is

the appropriate methods in each culture are

Is there a way I can adapt each of these lenses into a hybrid that could be more than the sum of its parts as part of my process? I have some references in Zotero on interdisciplinary and transdisciplinary practice, and I’ll try and flesh out my thoughts on this in a later post.

The map and the territory

So for me, at this stage perhaps ‘open book’ is about being open about what I’m doing and finding that ‘walking the line’ voice Meier & Wegener talk of; my own voice that’s not dismissively oversimplifying, but also isn’t so ridiculously detailed it gets all The diary of Tristram Shandy! Fundamentally I’d like to document and demystify a process that’s far from linear and will contain as many blind alleys as… what’s the antonym of a blind alley? Highway of enlightenment? Footpath to the sunlit uplands? There will be some nuance; finding a balance between just sharing unedited brain dump blah, and offering up a processed, coherent version of myself that sanitises out all the self-doubt, ‘stupid questions’ and meanders.

So that’s a bit about what I’m hoping to achieve, but what have I actually been doing? I’m still following the threads from reference to reference, and the ‘things I know I don’t know’ hole is increasing. But I am starting to get the occasional loop where I get back to something I’ve read, or at least added to my Zotero library. That makes it feel a bit more like there’s a chance of eventually darning the aforementioned hole. The SCANZ conference threw up some fantastic conversations and I’ll post about those soon. I’ve also had a bit of a convoluted battle with ethics approval. Despite my future subjects being high-functioning adults talking about their professional life, it came back as needing to go through a category A process. This did strike me as overkill, but I think it’s the nature of trying to manage a research process that requires a bit of malleability through a system that is set up for much more rigid and, for want of a better word, ‘sciencey’ projects… ah those pesky disciplinary distinctions ;-)

Collins, H. (2010). Creative Research: The theory and practice of research for the creative industries. Fairchild Books.

Longden, V. (2017, August 18). Book Review: The Open Book: Stories of Academic Life and Writing or Where We Know Things by Ninna Meier and Charlotte Wegener. Retrieved December 10, 2017, from http://blogs.lse.ac.uk/lsereviewofbooks/2017/08/18/book-review-the-open-book-stories-of-academic-life-and-writing-or-where-we-know-things-by-ninna-meier-and-charlotte-wegener/ 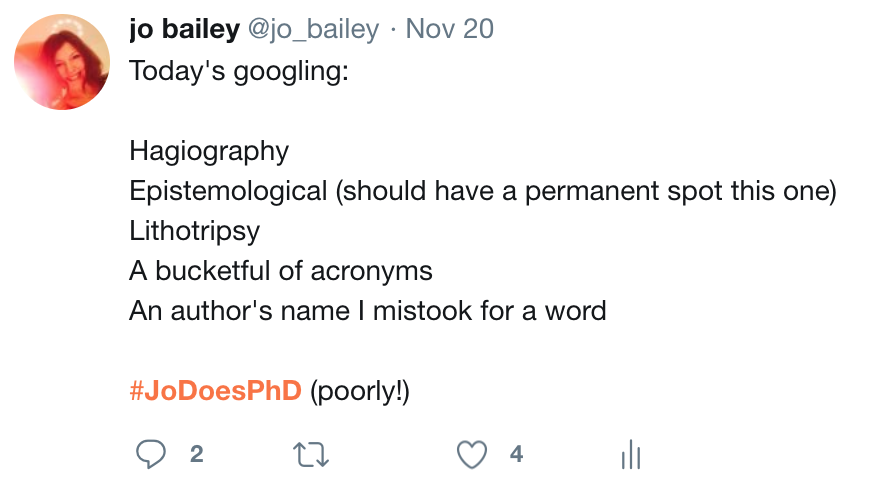 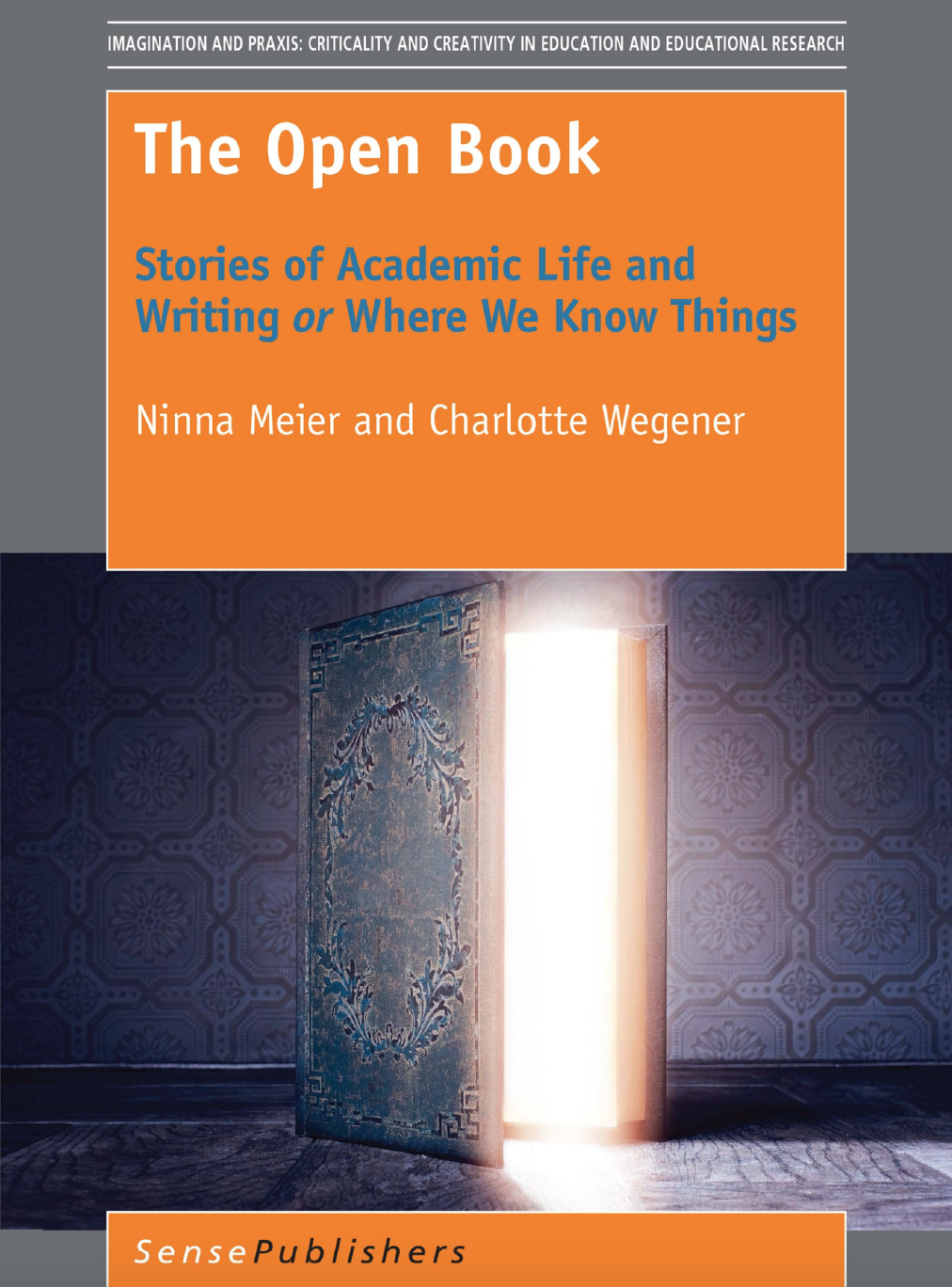 Thoughts > PhD Part 04: What is Reflexivity?