I’ve been going through a period of feeling rather overwhelmed. Work stuff, life stuff, and not dedicating time to the PhD stuff.

I told myself it was much-needed processing time after getting my proposal out the way and that’s part of it, but it was also just having too much on my plate and not enough headspace, and not getting on with anything as a result, rabbit in headlights style. So this is a meandering procrastination/reflexive processing blah to try and jolt me out of it (really only written for me, but if you’re here, thanks for coming).

I had another MRI scan back in January, and I saw the neurologist a few weeks ago. These things leave me feeling discombobulated, but healthwise, I am as good as I could possibly have hoped for (I have a holding diagnosis of recurrent idiopathic optic neuritis – it seems this means ‘we don’t know why this happened but are hopeful if it comes back it’ll do the same thing and fix itself, more or less’). So it’s a wait and see, but in the meantime I’m not on any meds, which I’m glad about. But it’s only after the fact that I realise how much waiting for appointments, then waiting for results, then waiting for the follow up puts me in a kind of stasis – outwardly functional but inwardly on pause.

One of my scans. I love the way the eyes ghoulish appear and vanish!

The neurologist took me through my MRI scans. Watching her whizz them about on-screen was fascinating. A bit like when they do the high-tech touchscreen bonkersness in films that’s shorthand for ‘this is the future!’. Visually, it was intriguing, a bit intimidating (but less so as her soothing voice was telling me how normal everything was looking). But it also made me feel oddly detached. This was my brain – the engine of everything I do – but I only knew that because it had my name next to the scan on the screen – there was little recognisable (save for the occasional glimpse of nose profile or teeth or cheekbone that I can sense a me-ness in). This is in contrast to the rest of my body, which even mediated by the mirror or the photograph has a familiar topography, and temporal changes I notice visually (usually in the mirror as I watch the grey streaks of hair spread out).

I was left even more detached when I got the scans on a DVD. I own nothing with a disk drive any more (who does?!), so a friend with far too many vintage computers copied off the files and put them on Dropbox. They were too big for my meagre storage limit so he Airdropped them. Chug chug chug went the download bar. I tried to open the files but had to faff around with a two-hour Java download to get the software to function. It all seemed primitive and domestic compared to how it had felt in the hospital.

Today, I began looking at them. A colleague came in as I was scrolling through the pictures, and commented how interesting it was to see a normal MRI (having, I guess, seen less benign medical imaging in their own experience). We talked about how digital tools can add a level of detachment, which resonated with a presentation by Virginia Eubanks we both attended last night. Eubanks talked about her book Automating Inequality, which discusses the impacts of data mining, policy algorithms, and predictive risk models on disadvantaged communities, and we wondered if managing decision-making through a digital tool was different to paper processes – more dehumanising, perhaps.

They directed me to a blog post by Caroline Bennett on the UK Visual Anthropology website, in which she recounts the plethora of scans and imaging she was given after an operation, and how this left her ‘fascinated by this exotic presentation of my self, at once both recognisable and completely alien.’

Bennett describes how in social anthropology the ‘physicality of the body… is often de-emphasised in favour of approaches that examine the culturally constructed meanings inscribed on it, the symbolic aesthetics presented, or the performance of power that the body enables’. She recounts how her medical treatment left her unable to evade the physicality.

For me, only really starting to question the cultural meaning of how the way I look – white, female, middle-aged – affords certain privileges, or at least provokes certain assumptions (positive and negative) this was quite interesting and threw up some more feelings. Recently I’ve got a bit sick of the ‘do you have children?’ question. It’s inevitably asked innocently and because I’m demographically in the space where it’s likely and because on the whole people like to talk about their kids. I don’t have any (by choice – I can’t imagine how it would feel to get asked if I wanted to but couldn’t), but I sort of resent the implication that I, as a person, could be defined, categorised even, by having given birth to another human. I’m sure that sounds self-absorbed, resentful and petty to some, probably disqualifies me anyway from ‘selfless motherhood’ in the eyes of others, but I can’t help pondering the way women get defined (or sometimes define themselves) through their children in a way men rarely are (or do). Anyway, that was just a convergence of thoughts that looking at my insides brought to the metaphorical surface.

Bennett goes on to think about how our understanding of the body is influenced by images, especially in a medical setting. She recounts:

I lost the power of control and interpretation of my body and others gained it – only certain doctors could take the pictures, certain others could read those images, whilst still others could decide the actions taken on me.

This is something I can absolutely understand. The first time I had an MRI (I’ve had five now, an old pro!) I remember thinking, is the person outside this tube, on the other side of the glass looking at slices of me right now, frowning at the lesions that would define a diagnosis? Every word spoken to me through the earpiece I scanned for cues that might suggest an interpretation of something I couldn’t see. The machine clunk clunk clanked and whined around me and I lay in the beige claustrophobia, squeezing my eyes tight so an itchy tear wouldn’t roll down my cheek. A sense of powerlessness. A sense someone else controlled my destiny.

Then the wait. These pictures of you are being taken, shown, interpreted by people I’ll never meet. With the images, the ‘power’ being handed from anonymous doctor to anonymous doctor. Thinking that to hear back quickly would be preferable, but then to hear back quickly might mean an emergency and my brain imaging having shown up something awful… the churn churn churn of fear and rational thoughts, and functioning on a thin crust of ‘normal’ that could give way at any time.

And in the end, an unceremonious email saying I should check my GP portal. That moment everything feels finely balanced. Then, a flooding relief that it says something along the lines of ‘normal’ and it’s like suddenly the sound of everyday life starts again and you realise you’ve been on pause.

I’m not sure exactly what the visuals of my own scans symbolise to me. The losing of myself perhaps – the loss of control over myself, and the uninvited and uncontrollable agency of other people within my body.

I didn’t realise, until an idle scroll through them this morning and this subsequent spilling of words, that my images held this same power for me. I thought they were an interesting – graphically, visually – articulation of technology, nothing more than an illustration of a medical procedure that was done, over. But it’s taken the act of ‘owning’ them, literally, of controlling them on a screen, then filing them away, for me to appreciate that only now can I ‘own them’ and absorb them and move past them. And now perhaps appreciate them as I intended – as, in Bennett’s words, ‘the beautifully alien aesthetic of the body’.

So it appears I've been more tied up in my health than I realised. I didn't even know, when I put pen to paper this morning, that I'd write about anything other than struggling with workload; the normal grumbles of a busy person. Hopefully this getting it off my chest (or out of my brain), will have helped me move forward :-) 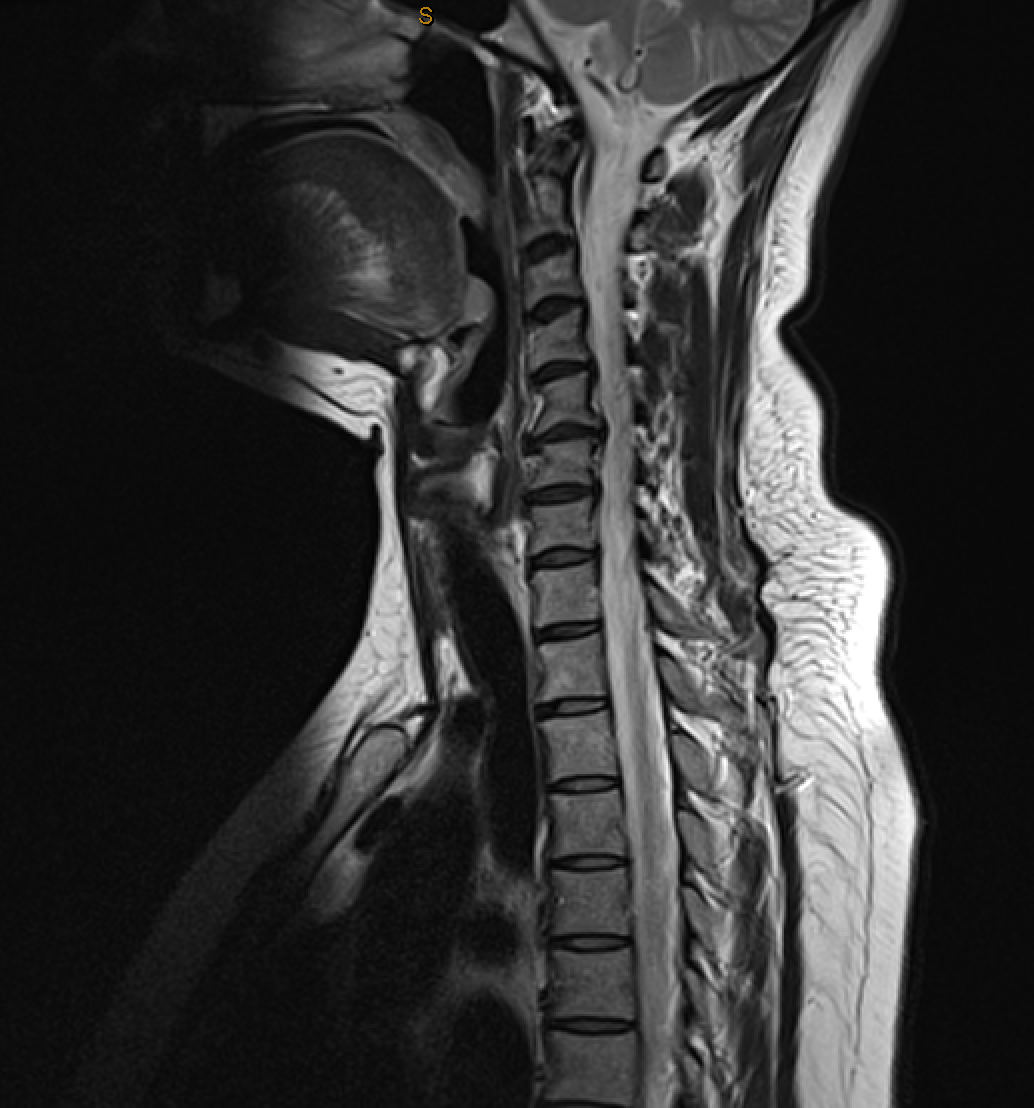 And I'm not spineless!